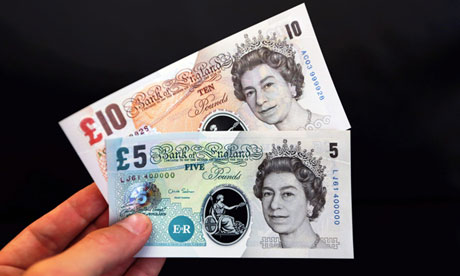 - in Printing News
- By Hybrid Cylinders
- No Comments

G4S, the world’s biggest security firm, is to believed to be preparing a joint £1bn bid with the French group Oberthur Technologies to supply Britain’s next wave of banknotes.

The Bank of England has invited bids for a new 10-year contract to produce all its notes, which will be made of plastic if the public back the plan in December.

A source familiar with the situation told Reuters that G4S, which drew fierce criticism last year for failing to provide enough security guards for the London Olympics, would provide services like cash handling and security alongside Oberthur’s printing expertise.

G4S, which as well as transporting cash for banks and retailers runs prisons and immigration centres in some 125 countries, declined to comment. Smartcard maker Oberthur could not be reached. The Bank of England said it would not comment on the bid process.

The contract is due to start in April 2015 and includes the option of a three-year extension. British firm De La Rue, which has held the contract since 2003, is to rebid. Media reports have speculated that other bidders could include the Munich-based Giesecke & Devrient, Landqart – the banknote division of Canadian firm Fortress Paper – and the UK-based Innovia Security.

The Bank has issued paper notes ever since it was created in 1694 as a way of raising money for King William III’s war against France, but is now keen to go plastic. Polymer banknotes, as well as being hard to fake, are durable and stay cleaner for longer because the material is more resistant to dirt and moisture, the BoE has said.

As well as using the new material, the notes would be 15% smaller and feature a see-through image of Britannia.

Led by new boss Ashley Almanza, G4S is embarking on a turnaround plan after a string of blunders by his predecessor Nick Buckles, including a failed takeover bid in 2011, the botched London 2012 contract and a profit warning in May.

In August it raised £348m through a share sale and earmarked more cash to come from asset disposals, as it seeks to cut debt and increase its focus on emerging markets growth.

Plastic banknotes have been in circulation in Australia for more than two decades and are being rolled out in Canada, Bank governor Mark Carney’s home country. The Bank said its polymer project began long before the new governor was appointed.