Today it is essential for processes and products to be environmentally friendly. The customers demand it and environmental ‘bad boys’ could lose market share. And now the climate change, which could become an even more serious challenge for industry, is the top theme in the political debate. On 2 February 2007 the Intergovernmental Panel on Climate Change (IPCC) – a joint body of the United Nations Environment Programme and the World Meteorological Organisation – published a ‘summary for policymakers’ of their fourth Assessment Report.

The media resonance was gigantic. The report points out the seriousness of the climate situation and asks for quick action. In the 20th century the earth warmed up 0,7 ° C, and this process is accelerating. According to the IPCC, the temperature increase is now 0,2 ° C per decade. The only escape to stop this process is to reduce carbon dioxide and other greenhouse gas emissions, and the first and most important measure should be the saving of energy which will affect industry.

How will the printing industry be affected?

Gravure recycles as many substances as possible

The basis of the environmental friendliness of gravure printing is the principle to recycle as many substances as possible. The prime example is the solvent used in publication gravure: toluene. The system is so optimized that more than 95 % of the used solvent is recovered and reused. The recycling rate in new-build publication gravure plants is even higher than this value.

Furthermore, the substance is reused at the same level and has the same quality as before, it is not downgraded. Another positive recycling aspect is that printed matter which is printed with toluene inks – which is only the case in publication rotogravure – can very easily be de-inked and recycled by the paper industry. It is clear that the recyclability of printed matter is the most important aspect of the paper chain.

But let’s start with the cylinder preparation. In former times gravure cylinders were produced with photographic films and etching. This was a complex process which needed time, raw materials and energy and led to some chemical waste.

These production steps are completely replaced by digital data handling. The final step of producing the cells in the surface of publication gravure printing cylinders is done either electromechanically by a Helio-Klischograph or else with a laser installation, etching is no longer necessary. The surface is then plated with a hard chromium layer to improve its wearing properties. Nowadays most gravure printers buy the necessary chromium compound in dissolved from, which means that the Health and Safety aspect is substantially optimized because the occurrence of dust is no longer possible. As a sideline, the surface has a higher quality because continuous flow of the solution holds the concentration of the chromium ions during the galvanisation constant.

The productivity of gravure printing is very high. Advanced presses can print on a 4,32 m wide paper web at speeds of up to 16 m/s. But even with smaller units, the energy used per square metre of printed product is less than in alternative printing methods. However this advantage increases the longer the print run. The saving of energy reduces the carbon dioxide emission which is one of the top themes today and in the future.

The main environmental advantages of publication gravure printing are: 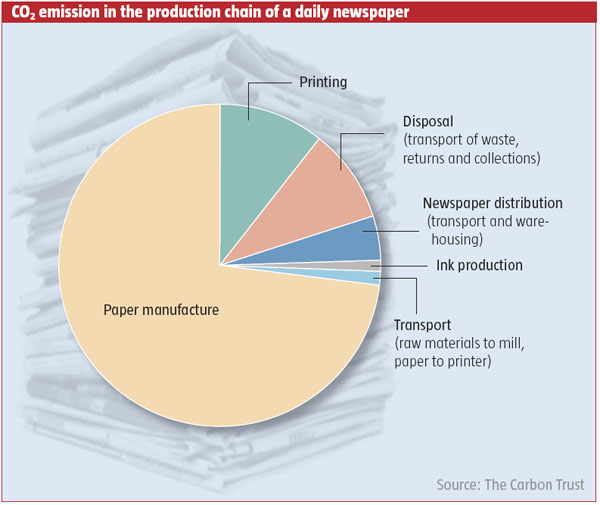